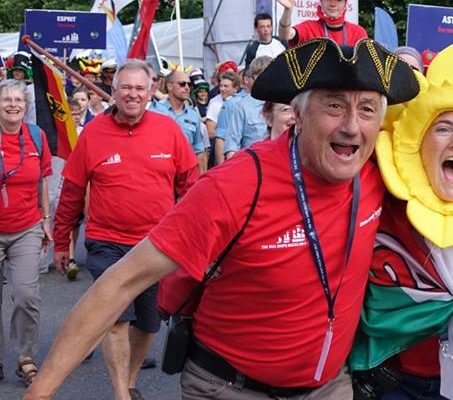 Our Tall Ships adventure from Halmstad (Sweden) to Kotka (Finland) seemed to ‘sail’ by (pardon the pun). Although at times it did feel like we were bobbing around (oh, actually we were….check out our video!).

But once in Kotka, it was time to see the spectacular Tall Ships in port, take part in inter-crew sports activities and of course the famous Crew Parade.

As we said goodbye to our trainees in Kokta, we welcomed 10 more trainees onboard for the next voyage, a Cruise in Company to Turku (Finland). A Cruise in Company is the more relaxed part of the Tall Ships Races series as it gives the opportunity to explore new places.

A few days later we arrived in Turku and what a welcome it was. We were proudly representing Wales and the UK and plenty of people lined the streets to wave at us in the crew parade, mind you we were doing a lot of waving to them.

Sail Training International reported that over 540,000 people turned out to the 4 day Tall Ships event in Turku, a record number for the port that has hosted a Tall Ships event no fewer than five times.

Catherine, one of our trainees onboard said the experience taught her a lot about working as a team: “For me the most valuable lesson I learnt was teamwork and the ability to form a close-knit and effective team from a group of people who were previously strangers”.

After the Parade of Sail in Turku, it was a night in a  new port, before heading to the start line of Race 2 to Klaipeda (Lithuania).

For this race, the wind was stronger than anticipated which made for a quick race and like many of the boats Challenge Wales arrived into Klaipeda earlier than expected. Challenge Wales was first of the Class C vessels to physically cross the finish line. Which was fantastic for the team onboard. Well Done everyone!! Our final result with handicap is 8th in Class C.

Although we were one of the first vessels in port, and had now already spent a day in Klaipeda, today we decided to go out and do a bit of sailing to say hello to the square riggers that were in nearby waters. It enabled those onboard to get a bit closer to the larger boats, we did a Challenge Wales Mexican wave and cheered as we went past….our way of saying a Welsh hello to our fellow competitors. We are now nestled back in Klaipeda….shoreside music is pumping out, the boats are in port, the party is about to begin. And what is on the horizon….more inter-crew sports, crew parade, crew party, cultural tours, saying goodbye to new friends….This is what Tall Ships Races is all about!

There is still time to join Challenge Wales on a summer voyage. There are a few berths available on the voyage departing the Tall Ships Races in the Parade of Sail in Szczecin (Poland) on 7th August to Amsterdam. Check out our sailing schedule…