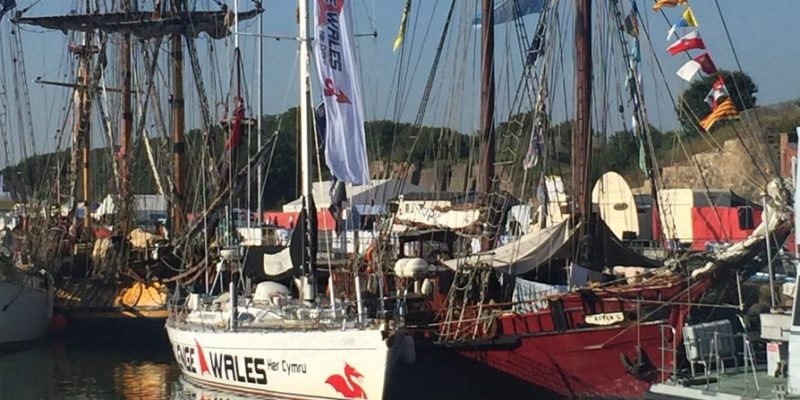 Challenge Wales uses social media to engage with supporters, funders, parents/guardians, young people and volunteers. It’s a engaging way for us to try and capture some of the impact we are having, keep people updated on what we are doing and share our successes. Winning a drone as the prize was fantastic and something we’d wanted for a while. Having seen the Volvo Ocean Race onboard reporters using drones spectacularly at sea we wondered if we were a bit ambitious in even thinking it was going to fly and then return back to us (at the moment we have had a trial run on the quayside).

Sunderland hosted a truly spectacular Tall Ships event. Flags and more flags could be seen fluttering in the wind and a great opportunity for photographers to capture some spectacular shots.

In the afternoon of the 14th July, Challenge Wales headed out of the port for the Parade of Sail, and what better way to say goodbye to Sunderland. With spectacular square riggers, that Captain Jack Sparrow would be proud of, smaller vessels dressed with flags, seeing the International Tall Ships fleet sail out watched by thousands of people from shore is truly memorable.

At 1945hrs we started our race and impressively were the first boat in our Class (Class C) to cross the start line. With young people onboard Challenge Wales and going straight into a night sail would certainly be a team bonding event.

By morning (15th July) Challenge Wales was in light airs in the wrong direction which are conditions that Challenge Wales doesn’t perform her best in but even so, she is still making a strong effort being 6th in Class and 6th for Line Honours.

The Tall Ships Races is one of the largest youth and cultural events in Europe and an event whose impact can’t be underestimated. It’s youth work in action and with no fewer than 8 different nationalities onboard Challenge Wales for this first leg it’s an experience that will be life-changing for many.

You can track Challenge Wales when she is racing here: http://yb.tl/tsr2018#

Don’t forget you can keep up to date with our adventures on twitter, facebook, instragram and linkedin. So give us a like or a retweet and show your support! 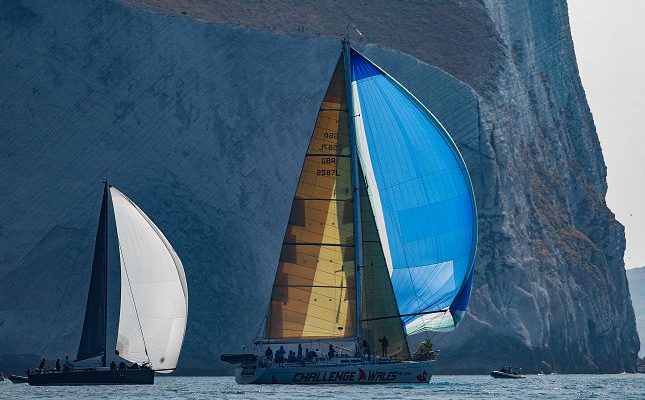 A 5.00am wake up call, a 5.30am departure from the pontoon and a 6.30am race start didn’t dampen spirits on Challenge Wales | Wales’ Tall Ship today, and after just over 11 and  a half hours Challenge Wales crossed the finish line in the famous Round the Island Race.

In what is the largest yacht race, with over 1,200 boats taking part and with around 10,000 participants taking to the water it really is  a spectacle like no other whether you are onboard or in the crowds watching and, if you are not doing either of those then following the fleet on the website race tracker can be pretty addictive too.

Challenge Wales, as a Class 0 vessel, was in the first group to start and as the cannon went off (fired with the press of a button by Dame Ellen MacArthur) it was a moment of excitement for everyone. For some of those on Challenge Wales it was their first Round the Island Race, while others had raced multiple times. But that didn’t matter as the exhilaration, anticipation and excitement was just the same.  Every 10 minutes for well over an hour another class of vessels would be facing the start line. Challenge Wales was the last of the Challenge 72 yachts to cross the start line. That gave us a bad start and in light airs which would be reducing through the morning, a bad start wasn’t what was needed.

The Challenge Wales charity uses Round the Island Race as one of its adult fundraisers which helps raise awareness of the sail training charity and also helps bring in revenue into the organisation to support our youth development programme, providing life skills to young people. It’s also one of the only opportunities where you will get to see several Challenge 72 yachts racing together against each other. And a great teambuilding event for companies, colleagues, friends or someone on their own to join in with. An hour and a half into the race and we were making good progress and swapping places with the other Challenge boats.

As we went past the Needles, the spinnaker came out and as a spectator it is quite spectacular too see hundreds and hundreds of boats, all shapes and sizes turning into a mass of colour.

Although we seemed well ahead of the other Challenge Boats we knew with light airs and tide it could be anyone’s race.

Challenge Wales managed to make good use of the wind and having a competitive skipper and team onboard and sailed ahead of the other Challenge 72’s.

A couple of hours later the wind dropped and it wasn’t until a couple of hours after that the wind started to pick up and we were able to gain some speed again and get across the finish line.

We finished the race,  beating again the other Challenge 72’s and the Clipper fleet, a few minutes after 1800hrs. Our elapsed time was 11 hours 34 minutes and 36 seconds, 18th in class and 283rd overall (which we don’t think is too bad seeing that 1,204 vessels started!). Here’s to next year…maybe!?